The Angel of the Norse (Part two). Mr Ben and the 12 bore

Art today in School which was very useful as the art teacher let me carry on with my project; The Angel of the Norse for the Christmas window of Napoleon Beelzebub’s Very Strange Victorian Curiosity Shop. As I pointed out to the Art teacher, Mr Beelzebub would be very very annoyed if his Christmas Window was not finished in time for the Christmas preview.

The Angel of the Norse now has a head and wings although not hands or proper feet yet and still needs to be painted up so a lot to do. I have told the Art teacher that with luck it will be finished on time and all will be well. Mr Beelzebub has seen the pictures I took and has given it four out of ten now as it has horns but he says it is not very scary; it’s not easy to make a scary angel without it ending up looking like a Vampire Bat as you will all know if you have ever been in dads workshop during Easter.

The grinding wheels of house selling appear to have taken a leap forward today and all has gone well, it’s just that the house buying is a bit is delayed in paperwork. Although our very nice solicitor Mr Ben who is a keen shooter of things that move says there is an IDIOT in the chain (none of us) and he thinks both him and Mr Beelzebub need to go and see a man about a man and nudge things along. Mr Ben says house selling and buying in his experience has always progressed much faster with a 12 bore in the office, as he says it focuses the mind. A 12 bore is an excellent method of dealing with the small print in contracts as after a small volley of shots most of it can be removed very effectively. I think the main problem is it does leave all the paperwork very raggedy, but a pink ribbon and a wax seal soon sorts all that out.

Esmeralda has now been banned from taking fireworks to school, she is a bit upset but she has found a way round this by tying her friend Catherine to the wheels on the school bus and wrapping her up in fairy lights and making her shout WooooooSH Baaaang FiZZZZZZ Crack (the noises not the drugs). Well there is no denying that Catherine does look like a Catherine Wheel particularly in the dark. I think the bus driver is a little unhappy about it but Esmeralda smiled at him so understandably he is doing as he is told.

The dog has told Esmeralda that Catherine is spinning the wrong way and she really should be attached to the other side of the bus in future, well either that or get the bus to reverse to school. 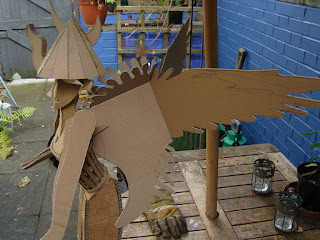 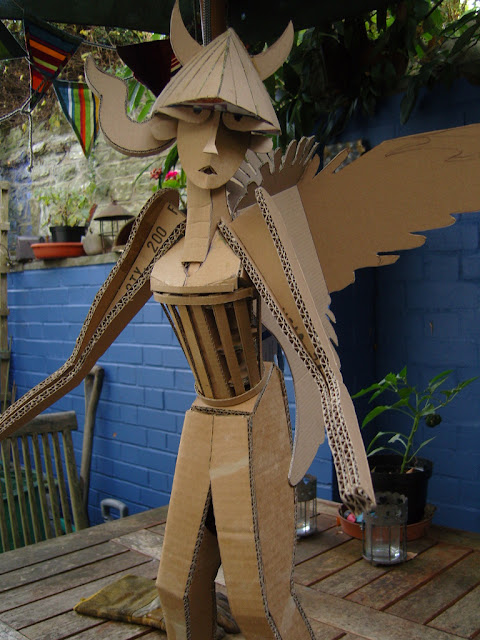 The Angel of the Norse with head, horns and wings and no hands

Email ThisBlogThis!Share to TwitterShare to FacebookShare to Pinterest
Labels: Christmas, the house