An Update of an Ever Unreliable Diary about Stuff

MMMMmmmm Hello yes I know it’s 2020, how did that happen. Well as you know our cat Sooty had a terrible accident and that was the last post. Since then many things have happened. From Boris Johnson becoming the new British Prime Minister and then winning an election. From a personal point of view I think this will not be good, but who am I to know; I’m just a chap keeping a low profile in a world that us humans are and have made slightly worse than it was before we arrived. Although that is entirely subjective depending on your view point. Dodos however think humans are terrible things, or they did before we ate them all.

Right back to the point we have also gained a new cat something we said we were not planning to do. What we decided was we would not look for a cat, but if a cat found us we would look after it. And sure enough as a direct result of our favourite vet we ended up with another black cat which we have now called Snowy. We were told it was about 5 but we suspect it may be nearer 10. It is certainly very quiet and chilled and does like a good sleep and is often in bed till about ten thirty in the morning.

We have had a couple of trips to hospital and the Ghost Writers wife is due to have a new all singing and dancing hip in a few weeks.

There is a tiny leak in the workshop and also the summerhouse, the result of a rather wet winter, but these can’t be fixed until the rain stops. I have a feeling that it will not be long until something rather profound happens on the planet that will have folk saying . . . . . . . WHAT . . . . How did that happen . . . .

I don’t know what this will be or when but I do think it will be sooner rather than later. However as I have already said I am just a chap and know nothing.
Right that’s it I’m off now. Not sure when I will return, but if something profound happens I’ll be here saying    . . . . I told you so and being all snug while fending off an Alien, Zombie or squid with a pointy stick. 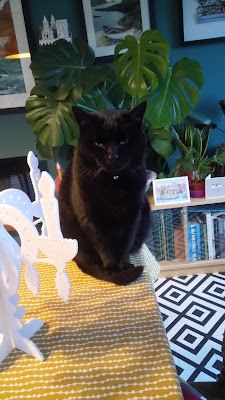 Posted by Rob Z Tobor at 21:21 No comments: Links to this post