The Air from the Earth, Blue Sky Thinking and keeping ones feet firmly on the ground

There was something strange this morning in the sky in fact it was so strange that I took a photograph of it. Yes yes I have been taking photographs of the sky again, but that is now my back up book, if those fools who should be publishing my book don’t. I am sure you will all have heard of the book THE EARTH FROM THE AIR full of photo’s of the ground from a hot air balloon well my back up book is called THE SKY FROM THE GROUND and will be full of photos of the sky from the ground.

So I can hear you all thinking do we care about this, just tell us what the thing in the sky was and we will make up our own minds how strange it was. It was (and I hope you are now poised on the edge of your seats) Blue Sky, is that a groan I hear from those of you who have been seeing blue skies for ages now. Some of us have lived with grey for what seems like for ever (several days anyway), it was still dam windy and that did not calm down until tonight

I told the Art teacher of my photographic project and my back up book concept and he said I was living in cloud cuckoo land and that i need to keep my feet firmly on the ground and then fell about laughing, still it was better than the dog who thought I need to do some more Blue Sky Thinking and reconsider it saying the book has no PLOT ………… OF LAND he then fell about laughing. Really I thought it was quite a good idea, even dad said it’s a good down too earth, solid as a rock idea although mum did shout IDIOT at him while he was rolling about laughing in the kitchen with the dog and Captain Flint the Parrot.

Still as I told the headmaster at the end of the school day they laughed at Christopher Columbus until he invented the spinning Jenny or was it the deep fat fryer. 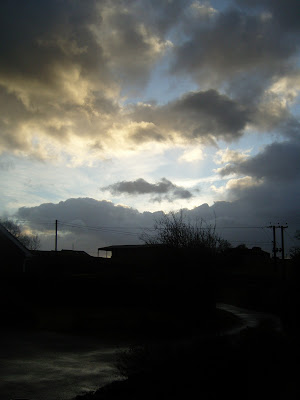