The Llandudno Goldwing Light Parade.The Big Bright Blue Pickup, and the Angel of the Norse

Dad was in a strop for a while this morning when he found out he had missed the Llandudno Goldwing light parade. Mr John from the Ashram had been there and it was really cool so he said. So Dad was sulking until a big bright blue cool looking Ford pickup arrived at the hardware shop to distract him. Then he found a pile of stuff to get rid of so vanished off to the recycling in Welshpool and even returned without more (but different) rubbish. 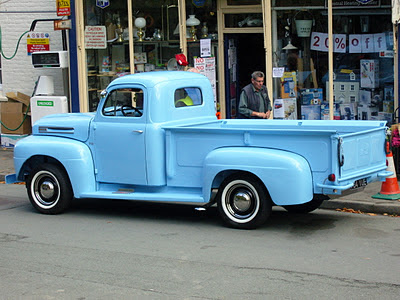 Mum informs (that’s not an Apple mac device by the way) me this is a man thing again, you send them to a skip to dispose of rubbish and stuff and they return with the stuff and rubbish that other men have put in the skip. Funny enough that seems quite logical to me I don’t really see the problem with that, although mum said IDIOT, and thinks I am well on the slippery road and it already too late to save me ………. WELL COOL dad will be pleased. The ghost writer who is here again says he does not see the problem either but mum has thrown the Armadillo toaster at him so he is considering changing hid mind. Particularly as his present one is now dented.

Esmeralda arrived in school wearing a Polar Bear coat saying it has got very cold so she was not going to freeze at school. That is a good point the school heating comes on the same date every year irrespective of the outside temperature and goes off in the spring on the same date every year too. So there is another week to go yet so the school is cold. Esmeralda is scary enough but her Polar Bear coat still has a snarling Polar Bear head and huge pointy claws. The result of which was several pupils and a teacher screaming and hiding in the cellar for three hours and the school cat is stuck up the flag pole waiting on the fire brigade to  rescue it (I told you the cat would be alright …. Sort of).

I am now working on the Christmas window for Napoleon Beelzebub’s Very Strange Victorian Curiosity Shop. As you know (OR YOU SHOULD DO) I am making a Christmas Angel with a Viking helmet and horns and she will be called “The Angel of the Norse” which must be finished by the first Friday in November for the Christmas Preview which is generally very busy indeed.

Oooooo by the way fish pie for tea tonight YUM, the dog says YUM too and Sooty the Cat and Heavy Harry the Cat.
Posted by Rob Z Tobor at 18:51

Email ThisBlogThis!Share to TwitterShare to FacebookShare to Pinterest
Labels: Dad, NapoleonBeezebub, news and the world