The Shape of the Universe and Tea Bags

Now I have been busy, very busy, but not in a constructive way but in a OOooooo the grass needs cutting and those weeds are huge, and I better do that little job tightening up those bolts on that thing over there and paint that bit over there. So basically  just everyday life and the Universe sort of stuff. What this means is the poor old diary is getting neglected again and such a thing will not do. To resolve this I am cheating  . . . . Well sort of cheating and repeating an old post from way back in time. And some of you will have noticed I have mentioned the Universe and Time and plan to go off and have a cup of tea the moment I finish here and that leads us smoothly and efficiently to my old post

The Shape of the Universe and Tea Bags

My diary of late has got rather quiet its existence in the parallel media's of cyberspace both showing signs that the great masses have left leaving only a few die hards and my good friends at GCHQ who know that it is better to monitor a friendly face rather than that of an annoyed face, or worse still an angry face. Would you while waiting in the rain at the bus stop in a queue for the bus that is late rather watch the smiling man or the angry man who might see you looking at him, I think the choice is plain always watch the happy man it is safer.

And so tonight after a quiet day and I mean quiet (although we are off to Big Bill’s Greasy Fur Ball Café tonight for a meal) I have decided to discuss the shape of the universe. As you know only a couple of days ago I mentioned the origin of life and as a result Mr H from the cyber-world asked me if I knew the shape of the universe. Now I know it is not something that most folk know but funnily enough I do, so I thought I could let you all know too. I have sort of mentioned this to Mr H already in reply to his comment because he knew it had to do with tea bags but was getting a bit confused and I forgot to mention the exact shape of the tea bag to him (very sorry Mr H) so I will now clarify it to everyone. I am going for my second Nobel Prize in less that a week. 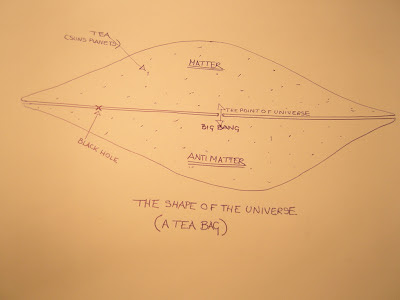 So consider a round teabag (a bit like a squashed flying Saucer) and that you could fold the edge back into the middle to a point known as The Absolute point of Universe, the point where the so called big bang occurred. And you then flattened out the teabag into a teabag shape again you would fundamentally have a teabag with no edges, which is important because the universe can not have edges just a force to hold its shape together (the material of the teabag itself). The tea in the teabag is then split equally between the two sides of the teabag either side of The Absolute Point of Universe a point so small not even an electron can get through it, this tea is the substance of the universe itself planets, stars and the like, and one side represents matter the other Antimatter. The fabric of the teabag where it is squashed together can therefore sometimes get small holes worn in it due to the forces generated and these are called Black Holes where the matter falls into the antimatter.

Of course the sort of flying saucer shape is created by the spin of the universe where material is thrown out along the line of centrifugal effect; however the one thing that can ruin a good universe is a huge kettle of hot water which destroys many of the forces that hold it together. And this can be made much worse by God squeezing the teabag against the side of his mug turning everything we know and understand into a soggy shapeless mass.

Well this is an old post so anyone who claims they have solved the shape of the Universe and claims it looks like a teabag is probably guilty of plagiarism and I will therefore demand they hand over the noble prize pronto or else.

Scotland, a Goat, a Greek Restaurant and some very expensive Fuel

Hello  . . . . . Yes I have returned after a short-ish break. You see I was in Scotland having a holiday in Dumfries and Galloway near Kirkcudbright. My timing was rather good because back here at home it turned out to be one of the wettest places in Britain and where I was, was one of the driest. In fact except for one very wild thunderstorm with huge hail stones it was dry during the day, every day we were there
Now I did not do a great deal, but I did make a Goat. It was not one of my own creations but one of Paul Spooner’s from his book Spooner’s Moving Animals. I have had this book since about 1989 and thought I really need to make some of these things. So I made the Goat ... I should have done more but I was on Holiday and our lodge was surrounded by hares, seagulls, a deer and men on golf buggies. So I was regularly distracted and also spent a lot of time on a nearby beach picking up tiny bits of driftwood to make something with when the workshop gets finished. There is nothing worse than an active mind full of more ideas than a body can shake a stick at.

There is a great Greek restaurant in Castle Douglas and I stuffed myself silly a couple of times during our week away . . . . . . Yum. It is worth a visit although he does not accept plastic and is a cash only sort of chap. So be prepared but it is worth every penny and more. I also bought some bowls, I would have bought more artwork but we have more art than wall space these days so a couple of really nice bowls to eat breakfast or ice cream in was a good option.

OOoooooo finally I drove up and back in the big beast that likes fuel but Tebay services must be one of the most expensive places to buy fuel in Britain. Actually the trip up was terrible it rained until we got 10 mile from our destination and we saw 2-3 crashes on route so it took much longer than normal and I was knackered when we got there. 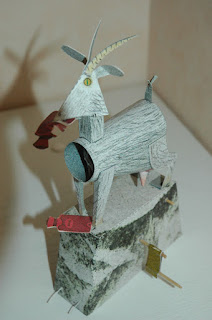 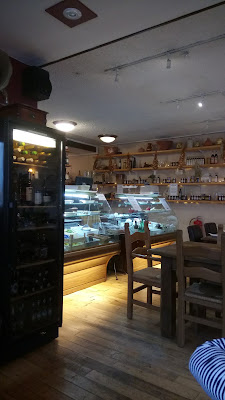 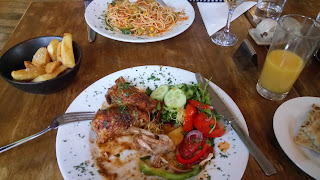 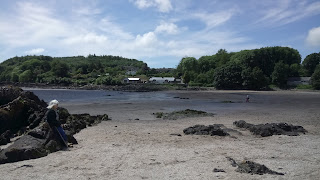 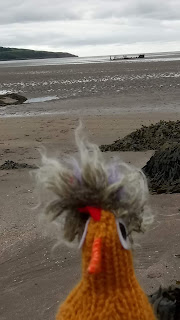 And yes the Chicken did come with us.
As he is inclined to do at times

Posted by Rob Z Tobor at 20:49 No comments: Links to this post

The Tale of Mr Ratty

We saw Mr Ratty again a few days ago so reluctantly I had to put poison in Mr Ratty’s home. Well I had to make a rough guess at his exact home. My problem is I am trying to avoid poisoning other beasts so where you put poison is very important indeed. Over a period of several days I had no sightings of our furry friend until earlier today when a large ratty beast turned up to eat the bird food. So once again I put some poison where I thought he was . . . . . . Under my workshop . . . . Typical. Well I guess it is getting used . . . . .

Then a few hours later when I went on patrol I found a dead Mr Ratty. I do feel bad about this but my wife hates the beasts and to be fair they will breed quite fast if they get the chance. So I picked up Mr Ratty by his tail and thought I would dispose of him in an old composting bin to avoid him entering the food chain and killing off other critters.

On dropping him in it, I discovered he was in fact just very poorly and not dead which explained his still floppy state. This left me with that terrible dilemma, to ignore the poor beast or put him out of his misery. So I did the right thing . . . . . Sorry Mr Ratty but I did say sorry; so he has gone to meet his maker now.

Well I think that is enough for now I will be busy for quite a few days but will be back soon to tell you all about it. . . . . . Assuming I remember because my brain is rubbish. 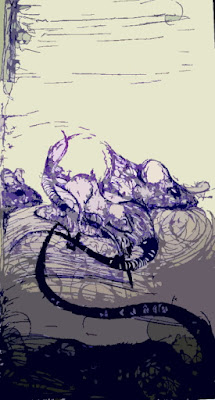 Cows, Zombies and Me, but not Football.

I am still working on the workshop; progress is exceedingly slow at present because not having a design can lead to technical issues as you progress. One of which I am trying to sort out in a neat way so that no one will ever know I might have made a design error. And I have almost finished . . . . Phew . . . . It is not structural so the workshop will not fall down, but I needed to sort it before I put the corrugated sheets on the outside walls or that would have been so much harder. Anyway that should now be a piece of cake . . . . . That’s an odd saying. Why something being relatively easy should be linked to a piece of cake makes no sense to me. If someone asked me to make a piece of cake I would consider that extremely difficult indeed. And not a piece of cake even if it was actually a piece of cake if you get my drift.  I mean I can make ginger biscuits dead easy and damn good ones too, but cake no.

I have been out this evening saving a cow which had got onto the road and was well spooked. Not helped by idiots driving too fast and refusing to slow down for the poor critter. Anyway the farmer who owns the cow turned up and it is now safe in its field again. . . . We suspect it may have been Zombies that released it. For reasons I have not yet worked out it seems Cows don’t like Zombies and Zombies don’t like Cows. Actually when you look back on films involving Cows and Zombies it is hard to think of one where both Cows and Zombies feature, generally its either one or the other.

Right I plan to have a cup of tea and a chill not watching football in any form whatsoever . . . . I am not a fan of football and I suspect neither are the Cows or the Zombies. So despite our differences we have much in common. 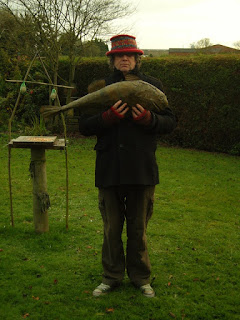