SO I guess you are thinking Hey this diary is very quiet plainly there is nothing much happening in the world. Well that is not entirely true because sort of out of the blue . . . (well out of a Chinese fish and wild animal market it appears) . . . has arrived the doomsday virus (Covid 19). Actually it is not a proper doomsday virus unless you are old and frail or have other health issues, but folk in general like the idea of doomsday so have decided to runabout panicking and waving their hands about or I should say washing their hands more than they have ever done before.

It is a curious thing this virus because it seems to spread faster than something very very fast indeed like for example a cheetah tied to a rocket.  The result of all this is economic Armageddon as stock markets crash (well that’s my savings a bit messed up) and an entire world panic buying anything they can stash away to eat that will keep them going when they have to lock themselves into their homes for several months to avoid becoming Zombies or worse.

There are of course always odd things that happen when folk panic on mass like an obsession with panic buying toilet rolls, something which ironically in not in short supply as manufacturers have upped production to meet the public’s desire for them. Although the public have decided you just cannot have too many toilet rolls. Or bars of soap now; I understand that one let’s face it half the public never washed their hands much until the coronavirus (covid 19) turned up so they have discovered a whole new thing to master.

Now you may think that there can be no upside to any of this as it’s the nearest thing to doomsday the world has experience in years, yet there are a few. Suddenly one of the most environmental bad things us humans do has plummeted. Yes flying, aeroplanes, no the aeroplanes have not plummeted but they are really bad environmentally and now they are not allowed to land anywhere so can't take off.  The Chinese have banned wild animals markets (again) so that is great as they were eating animals kept in terrible conditions or in danger of extinction. This time I suspect the ban will remain permanent. China will not want another virus entering the life of all humans on the planet.

Finally here in Britain the one positive thing is no one even mentions Brexit now, it is all but forgotten and by the time it crops up again the world could look very different indeed.

Well I may be back again soon I mean we are all locked up in our homes and listening to the news at present which is not very cheery.

And as some of you know I have had a long running battle with Zombies as they try to sneak into the garden and at present they appear to be smiling at me through the windows . . . . . MMMmmmmmmm That’s not meant to happen. 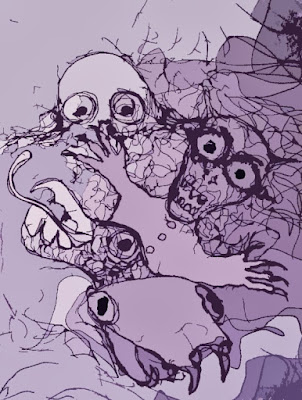