The cat, the boxes and the household effects sometimes called rubbish

Heavy Harry the Cat has spent the last half an hour operating the PC and it has to be said not very well as all it has done is bleep at him. The Dog is not very impressed as the cats can not do Maths, or speak Latin and he has now discovered they can not operate a PC. I think the cats might need the IT teacher’s artificial brain the size of a brain. 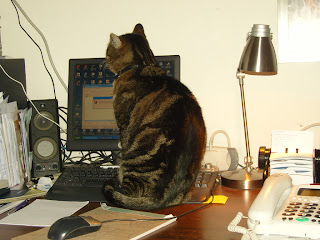 Heavy Harry the Cat and the PC

As it happens one of the things I did notice yesterday was there was virtually no one in school and it was rather odd to spend all day doing IT but I discovered today it is half term ………. AH. I did ask mum why she let me go to school on half term, but she thought I was being super keen and not being an IDIOT. Anyway because I have been at home today I got to move loads of boxes about, apparently I am allowed to do this all week if I like but me and the dog might try and escape to the Woods to see if the Lemmings and Dodo’s are still OK and have avoided either catapulting themselves to death (the Dodo’s) or leaping off high things to their death (the Lemmings). Although no one dies much in cyberspace and they are always smiling the next day, well maybe not smiling as such.

There have been some really bad storms in the UK over the last twenty four hours with loads of flooding it has not been good but it has not effected where we life in the hills of Wales and the weather has been OK here. It was quite warm and sunny today where we are, so it just goes to show how fickle the weather can be in the .

I  did manage to go and see what was for sale in the town hall, every now and again they have an auction of what is called household effects or what mum calls RUBBISH. But as it happens I quite liked some of the stuff in there this time some nice cool looking chairs and a few interesting Victorian bits of furniture, sort of stuff that could look good in a pirate ship. But as we move house in exactly two weeks from today; I think it would be madness to buy stuff. Well when I say I think it would be madness to buy stuff; mum said WHAT THAT’S MADNESS to me, the dog, and dad, so I think she might be right. Mum tells me that she is right and I am an IDIOT.


Ooooooo by the way I forgot, but I finished gluing all the preview invites together today too. I knew there was something else I had done, silly me