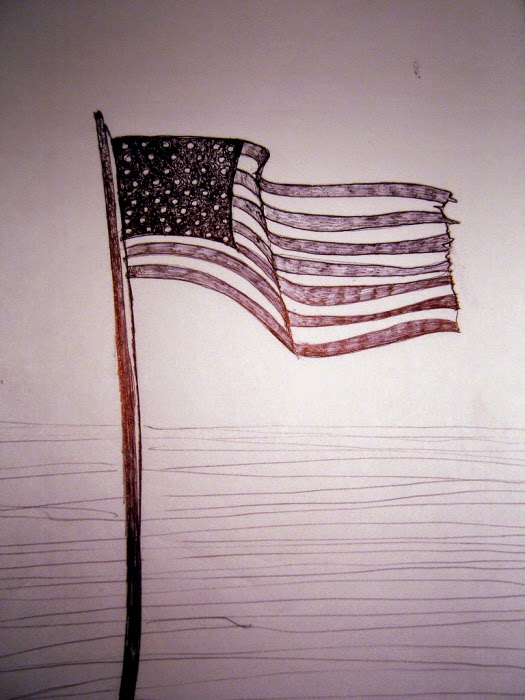 OK I am not good at drawing flags

Today is the 4th of July a day that is celebrated in the as Independence Day, a day when I am told leaps about, lets off fireworks and folk stand about being patriotic. Here in folk carry on as normal unless it is Sunday in which case they all go to IKEA.

Us British have always wondered why our American friends decided they were not happy being a colony of Britain, after all the ordinary man in the street such as myself is a fairly nice sort of chap and in general find Americas a nice bunch who almost speak half decent English. In fact it would be true to say that more English understand Americans than a Glaswegian just a few miles up the road in .  The American accent being sort of a cross between Middle England and Middle Australian, probably because they live in the land between these two great countries. American is more a group of small countries known as States so is sort of a bit like Europe really only they fight less and don’t insult their adjoining states like we do in .

Of course the good folk of the do have one or two odd anomalies that we notice from time to time when they come to visit the old homeland. They do seem to spell some words a bit oddly, however I do that all the time so I understand how that can happen. And they do seem to like the Queen and all the Royals, a bit odd when they were so keen to get rid of them in the first place. Ironically there are many folk in who would love to get rid of the Royals and would happily sell a few to the .  I have also heard them imply that their Zombies and Monsters are better than our Zombies and Monsters, well that is just plain silly everyone knows European Monsters are superior to all by a long way.  And we all know that a nice cup of tea and crab paste sandwiches in an old Lyons Café can not be compared with MacDonald’s, it is a foolish thing to even attempt. When was the last time you saw the corner of your Big Mac curling up in the sun and getting crusty while a gang of little old ladies pondered the iced buns.

Anyway I hope you lot over in the USA have enjoyed your day, and if you ever feel you would like to rejoin us we are happy to share a nice tea party (not that one but the one where you drink tea in the garden) with you………… . . . .

Ooooooo It rained today and I cut a hedge and ate food.
Posted by Rob Z Tobor at 21:06