‘Are we there yet’ . . . I can hear my brain saying. This alphabet thing is longer than you think when you are doing your best to keep a slightly bewildered and restless crowd amused via the magic of the Internet. Luckily there is now a light at the end of the tunnel, a tunnel that is full of soot and a rather annoyed Duck who is also heading towards the light at fair old speed which I estimate to be in the region of 126 mph (203 km/h) or there about.

Now you will be wondering about Plan T . . .  I suspect.  Well tonight I have abandoned my Plan and have Planned a Tea Break instead. This is the great virtue of the A to Z Challenge we can just say Ya Sucks Boo and make up our own rules and do our own thing. I mean if folk think . . . . I’m not reading this. . . . Well so be it

Hang on where has everyone gone? 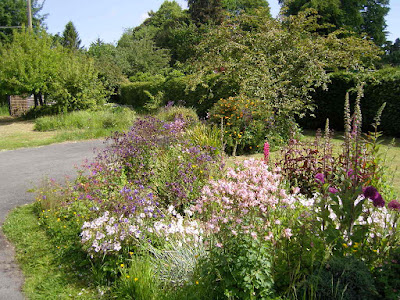 The Front Garden on one of its better days

Email ThisBlogThis!Share to TwitterShare to FacebookShare to Pinterest
Labels: A to Z, A to Z 2019, gardens