A rather bizarre, slightly odd and somewhat rambling trip through an A to Z of Plans. . . . . Sort Of

I suspect some of you will be thinking by now this chaps Plan for a Plan based theme for the Alphabet is Doomed. And that it’s (to put it bluntly) a Doomed Plan full of Death, Destruction, Distraction, Despair and The Devil and probably a Duck or two, now If anyone is thinking DUCK? Well some will know they do on rare occasions (a Lot) pop up on my A to Z’s much in the same way as they pop up in a pond while nibbling food on a sunny day.

I used to eat duck it tasted lovely, but in the end their cute little faces would haunt me at night. Their feathers whispering at me through the pillow case saying things like . . . . You ****** nasty ****** chap eating cute feathery critters that just like to chill and nibble stuff in the pond, you’re a ***** ***** you are. So I don’t eat duck now. Even my pillow is some sort of terrible foam thing designed to insure you won’t sleep well. But at least Ducks like me again so that’s OK. . . . . . . 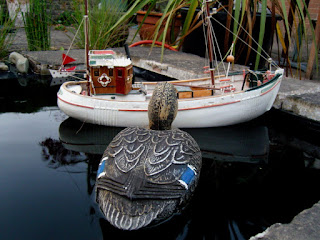 Email ThisBlogThis!Share to TwitterShare to FacebookShare to Pinterest
Labels: A to Z, A to Z 2019, ducks, Plans