As I work away on my workshop in the garden I have realized it is turning into quite a lot of work. This is my own fault for making a fully insulated, double glazed workshop with a few minor fancy bits. The summerhouse I built took three years, so I hope to have this all done in about six months in total . . . . . We will see. Anyway while the weather is OK I will keep working (I am not keen on work so Poo) and get the walls sorted next.

OK as diaries go this is a bit rubbish so to cheer folk up I have included a poem . . . . OK yes its a repeat from way back. I need to write some new poetry. Possibly about sheds and workshops, although that does seem to have rather limited market appeal.

Anyway here is one about a Vampire a Mummy and a Cat.

A Vampire and a Mummy
Chased a large black cute fluffy cat . . . . . (Meow)
They chased it up a lamp post
And past an Ex-London borough council flat
They chased it past the chip shop
And under a railway bridge
And into the recycling yard
Where it hid behind a fridge
They chased it into a cul-de-sac
Past a pound shop and a café
And into a posh restaurant
Where the cat knocked over a carafe
They chased it onto the artificial ski slope
Past a man singing songs and drinking Gin
And round and round a roundabout
Until they all got in a spin
They chased it into the cinema
Which was showing the movie
Catch 22
They chased it into a railway station
And then into the public Loo
But they soon all ran out again
Because there was a penguin
Doing things it should not do
Then they chased it past a statue
Of Queen Victoria holding a Stratoscope
Chasing the cat for hours and hours
Until they had almost given up all hope. . . . . . .
But when they finally caught up with it
It seemed the cat just did not care
Because the cat was in fact
An android Zombie Cat
Which cut the Mummy clean in half
With its android Zombie Cat laser eye stare
Which as you might expect
The Vampire proclaimed was ever so slightly
Rotten and
Unfair
And the cat smiled
And said it didn’t care
Typical cat 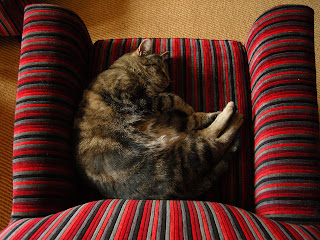