I have been busy, very busy in a sort of busy to the point of being well exhausted at the end of the day with a sore back. However it’s the sort of busy that when you reflect and look back on what you have done in the last couple of days seems to be not a lot. I’m sure I can’t be the only person this happens to. Anyway all I can say is that despite what appears to be not much progress with stuff it has been a right old game getting it done.

Yesterday morning after an early breakfast we took the cats to the vets to have various jabs for the things that are not good for cats to catch; and to kill off the fleas. I am not convinced any of the flea products work that well. The vet is a great vet and he is certainly one of the most eccentric I have ever met in my life. He is also Canadian so I am not entirely sure how he ended up in a rural backwater in the middle of nowhere. Most of the local vets prefer farm animals, not only are they bigger but they make more money out of them. This vet though loves small critters, any small critters I think he would be happy to do open heart surgery on a goldfish it the opportunity turned up. Anyway he has one small weakness in his vetting abilities and that he's not only bouncy but he talks loads and I mean loads and loads . . . . Phew. So we were a bit later than planned heading home with two confused cats. They are not used to enthusiastic talkative vets saying stuff like . . . . WOW those are amazing kidneys . . . . . and then making his trainee feel the cat’s kidneys.

So after taking the cats home and feeding them; we headed over to one of our daughters where I made a screened area for her recycling bins which had three shelves and a trellis front to hide everything, plus a small sloping roof to stop the cardboard recycling getting wet. Stuff like that takes a couple of hours to do even for a hardened DIY chap like myself . . . . Phew.

We then headed home ate some food and I was back working on the workshop until I was too tired to carry on.

Today I started on the workshop, then planted three smallish trees, then washed the car something that only happens once every 100 years or so which is an interesting coincidence which I shall come to in a minute. And then ate and watered the garden because it has been rather hot by British standards. (Yes the weather machine is still switch on). . . .
Right this coincidence I referred to, we have a couple of small bamboo plants in our garden. Bamboo is interesting it only flowers once and then dies, but it can live for 100 years before it flowers. Bamboo clumps get split and sold and then split and sold again and again in their life, but once one flowers they all flower across the entire world. And one of ours in in flower.  What I did not know is it is a sign of death, famine and doom across the world, and I have checked with the Zombies and they deny everything and say its Mrs May’s (the British Prime Minister) fault and the ever chaotic Brexit talks. . . . Plus todays European Elections for the European Parliament. I suspect the Zombies are right too. Politics is all a bit odd in Britain at present. 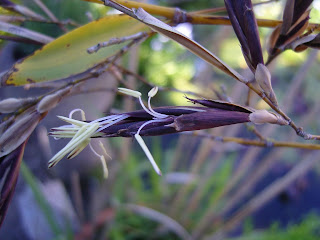 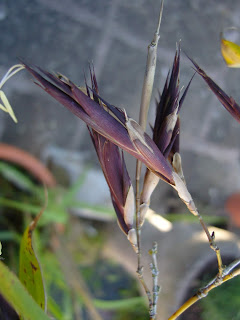