The April  2019 A to Z challenge is well and truly over I always enjoy it (although not last year as I was unable to do it).  I have to say I don’t always get to visit all those other folk  doing it, due to the fact I tend to be doing other things. April is that sort of month you see. Here in Britain after a long wet winter of yuck weather (I’m generalizing, but its true most of the time) suddenly things perk up and folk go . . . . “OOOOoooo look, a fiery ball in the sky providing light and heat. Let’s venture out into the world”. So they do venture out into the world and that includes me.

Now around here on my bit of the English Welsh border going out in April involves fresh country air, plants growing, cutting the grass for the first time, and making sure any random Zombies have not set up home in garden sheds or under dense undergrowth. I mean it is bad enough that the birds all set up home in our garden sheds and the dense undergrowth, but Zombies are bigger and often sing sea shanties at night loudly which makes sleeping difficult. And their eating habits are terrible.

Anyway this year I started making a Workshop at the very end of March and it continues even as I type, (OK not entirely true as I’m typing) and as this is a one man build. Partly because like many grumpy old men I am not really a team sort of chap. And that means the only person I am going to trust to do a job correctly is me which is also worrying because I’m old and starting to lose the plot so can make errors. I generally blame the cats when that happens, partly because it is them that tend to distract me loads leading to me making the errors  . . . . I think you probably get my drift and I am rambling now.

So that, you see is why I tend not to get to blogs on the A to Z Challenge much . . .  April is a funny month for us British folk (as I have said) and we always start our little projects that we have been thinking about through the long dark damp days of winter. I mean writing the posts for an A to Z is easy, well it is for me because I write mad ones, but visiting folk takes time a lot more time than most folk realise which is why most folk don’t get many visitors to their blogs or get to visit many blogs. It is just part of life and the universe.

On the Bright side when you venture out into the garden in the morning to shout at the Zombies who sneaked back into the garden last night and were singing (again) and have eaten all the goldfish (again). You will be able to think to yourself  . . . . . . So I guess a load of other folk who did the A to Z Challenge will be outside right now doing exactly the same as me . . . .Pesky Zombies . . . . . DAMN I don’t have time to visit all those other blogs now.  Maybe I’ll visit them tomorrow  . . . or maybe next year when I’m not so busy and I have made some Zombie defences that actually work.  But blink and before you know it its April again and the cycle continues.

Well thanks to those who did visit my blog, I hope I managed to get back and thank you all, I think I did . . . . . . And maybe I’ll see you all again next year.

And remember regardless of religion, politics, personal views and thoughts, the one great thing about the A to Z is we all start and end equal having perused a single collective objective. And that is a good thing in this world. 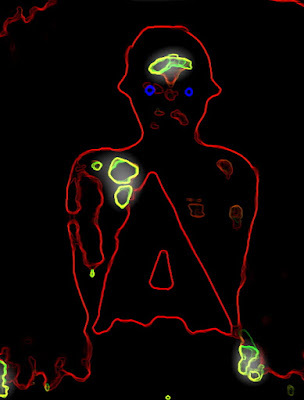 Email ThisBlogThis!Share to TwitterShare to FacebookShare to Pinterest
Labels: A to Z, A to Z 2019