When is a Duck a Duck

I am late again, it is all this doing stuff that is the problem so actually writing about what I have done is then harder. Anyway because it is late this is going to be the short abbreviated diary entry just in order to keep continuity, a diary without continuity is like a seagull without a mad glint in his eye and a belligerent swagger outside the fish and chip shop on a Friday night.

So in short we discovered that a Robot Elvis Duck is rubbish at swimming in a pond, A Glow in the Dark Robot Duck will float about but in a very uninteresting way, not in the true spirit of Ducks. And finally a traditional Female Mallard Robot Steam powered Duck is a good swimmer as long as any holes are properly filled up so that it does not list to starboard. 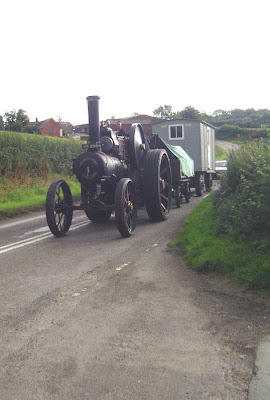 We also tested the old pond pump and it still works but we had not anticipated that it would siphon half the water out of the Robot Duck testing pond when it was turned off. Yes we should have thought of that, but even the minds of mad mechanical geniuses are not infallible or even inflatable.

I managed to get some PVA glue to glue things and showed Mr F round a shop and I have just been eating Bombay Mix and eating toast and peanut butter . . . . . YUM; even though it is rather late because that is the sort of chap I am… . . . . . . . Ooooooo and an old traction engine passed the house today on its way to somewhere so I took a photo and told them that the internal combustion engine would be far easier to park.
Posted by Rob Z Tobor at 23:34