The Headless Cultural Olympian and the first photographs

It has been one of the hottest days of the year so far if not the hottest. One of the interesting things about having solar panels on your roof generating electricity is that they give a unbiased reading of just now much sun has been shining on the roof during the day. Today we have generated 27 kilowatts so far with another hour and a half or so of evening sun to go, although that is not much in power terms due to the position of the sun in relation to the solar panels. But 27 kilowatts is fairly good I think.

The Ghost Writer however was complaining he was in a meeting all day in a big conference room with no windows so as far as he was concerned it could just as easily been snowing, we have all told him no it was a lovely hot sunny day and he now says he feels so much better to know that.

I am off again shortly to continue my task “The Cultural Olympian” he is finally starting to look vaguely Olympian now as he has two legs and two arms and a neck, although no head and no ribcage or internal organs. I might not bother with internal organs after all a cardboard spleen is no help to the best of us even a cardboard man. The next thing I need to make is his plinth, for some silly reason I said I would make him a plinth to stand on, carved in the finest Grecian marble. Sadly I have been unable to get a delivery of marble from due to problems in the Greek economy with the Euro, so I have substituted the marble for cardboard, as I still have loads of that. 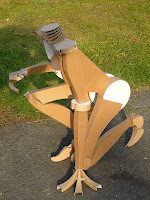 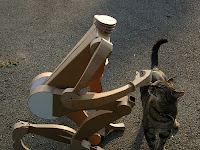 The Cultural Olympian and Heavy Harry the Cat 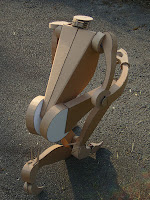 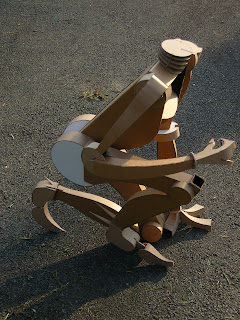 The cultural Olympian ..right side

I was going to mention the  menace of the man eating pterodactyl this morning at school, but it is too hot and still and have loads to do. I’m sure it will be back particularly as Freddie was feeding it breadcrumbs. He is a bit short sighted and thought it was a blackbird, admittedly a large blackbird and he said it did eat a hell of a lot of breadcrumbs which he found suspicious and he didn#y think blackbirds growled.
Posted by Rob Z Tobor at 21:08