I know this is what I wrote last year(and the year before that and that and so on) but it is now the new, New Years Eve traditional post, until I forget that I have one, which may be next year (NO I remembered) or next week, who can tell...... 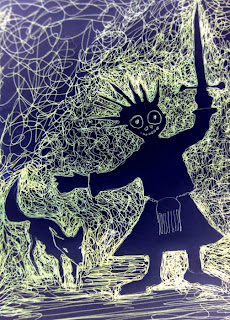 So here we are at the end  of 2014 (NO 2015) and we all know what that means, it means folk standing out on street corners shouting and letting off fireworks hugging strangers as they pass and singing that old traditional Scottish song that no one knows the words too. But luckily most folk are a bit merry and will not be aware that instead of singing the correct words the Masses are singing . . .  . . . .

which sort of shows that folk don't really know the words


Then everyone will repeat this until they get bored and spot an urban fox chasing a pigeon, where upon the masses will abandon singing Auld Lang Syne staggering about in a mad linked hands sort of dance and chase the fox shouting

O yes they all know the words then

So I have left a message with the foxes (again) to avoid large crowds of people who look happy. And not to spend the night raiding the Swedish meat balls in the bins of IKEA. And don’t go anywhere near people with tubs of butter

I would like to wish everyone a jolly happy new year and if you live in the  I believe New Years Day is due to be stormy/nice or something  (it was last year),  not sunny like this year (the year before last year).  . . . I dont know what will happen this year regarding the weather yet(2015 means rain).

If you do not plan to sing a fox based song and chase urban foxes then here are the words to Auld Lang Syne, the proper ones which are not as good but which are more traditional unless you live very near IKEA and are pestered by Urban Foxes. . . . . . . . . . .

And surely ye'll be your pint stowp!
And surely I'll be mine!
And we'll tak a cup o'kindness yet,
For auld lang syne.
For auld, &c.

We twa hae run about the braes,
And pou'd the gowans fine;
But we've wander'd mony a weary fit,
Sin' auld lang syne.
For auld, &c.

We twa hae paidl'd in the burn,
Frae morning sun till dine;
But seas between us braid hae roar'd
Sin' auld lang syne.
For auld, &c.

And there's a hand, my trusty fere!
And gie's a hand o' thine!
And we'll tak a right gude-willie waught,
For auld lang syne.
For auld, &c.

2015 was the year of trying to convince that nice Mrs JK Rowling I am an interesting alternative Poet, only it did not go well  . . . I suspect that play . . . The Cursed Child. . . . may be a hint at what see thinks about my words of Rhyme which sneak up on her from time to time