Oh No not another dodgy Christmas Poem about Christmas . . . . Sorry

O yes it is time for me to repeat yet another of the Christmas special poems where a friendly tweak I have sort of made to the original in order to cheer the hearts of the masses that read my humble Blog. Yes I know what you are thinking you are thinking . . . . . MASSES surely that is a slight exaggeration from the truth which is far closer to three or on a good day five and three quarters (not everyone makes it to the end).  As my regulars will know this was originally posted in my pre-wizard days before he who we do not mention (Harry Potter. . .DAMN sorry mentioned Him) became the focus of my wit and charm (Harry Potter. . . Charm . . . HAHAHAH Ahah ah a ha ha ha ha ha ha ha ha ha ha ha aha hahah). Anyway its OK for him he ran off with Lucky Heather; they didn't mention that in the books did they Ohhhh no. Apparently he had been seeing her for ages (from book four I think) and then that Hagrid got confused and told the wrong person and the whole story took a turn for the worse. It appears that in the unpublished book nine Harry's wife resurrects that Voldemort chap and he becomes her divorce solicitor and there is much shouting and slinging of mud and owls and............

Hang on I got a bit distracted there sorry about that. . . .A Christmas Poetic Adaptation of a well know chirpy Poem. . . . . I hope you enjoy it (assuming you have not read it or forgot you read it). 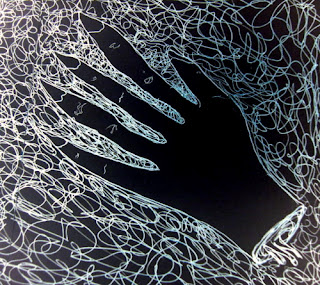 Once upon a Christmas Eve dreary, while I pondered weak and weary.

Over many a quaint and curious volume of forgotten lore’s.

While I nodded, nearly napping, suddenly there came a tapping.

As of some one gently rapping, rapping at my chambers doors.

'Tis some visitor,' I muttered, is it the curse of Santa Claws.

The constant scratching and demonic clip clop of cloven hoofs on my slated roof.

A demonic Red Nosed Reindeer loosening roof slates by the Score
.
And while I’m Knotting and neatly Wrapping presents, there is still a tapping.

It must be the curse of Santa Claws the cursed hoards rapping rapping at my chambers doors.

But what if it is a friendly visitor entreating entrance at my chambers doors.

Ho Ho Ho Merry Christmas I can hear. It is the cursed multitude of SANTA CLAWS.

Shouting shouting out into the night.