L is for Lester Livingstone (inventor)

Back in 2015 I wrote . .  The A to Z of Slightly Strange Unknown Victorian Inventors and Explorers it was a lot of work I mean it was not just writing a little tale for each letter but I had to invent something for each day and then draw a suitable picture to go with it. I also interlinked many of the little tales so if you read them all it would make an interesting coherent story. Sadly despite all the work only two people noticed all the links and it left me a broken man swearing I would never do the damn A to Z ever again. Yes Yes Ok I got over that a few hours later I am made of tough stuff and anyway I enjoyed it and at the end of the day surely that is the key point . . . Enjoy your own blog and have a good time creating it, do that and fame and fortune will soon follow. . . AH OK I LIE. . .

Anyway I dont think I have posted an A to Z post from the 2015 A to Z yet so here is one of the more modest inventors who sadly seemed to meet the same fate as many of the inventors I wrote about back then. 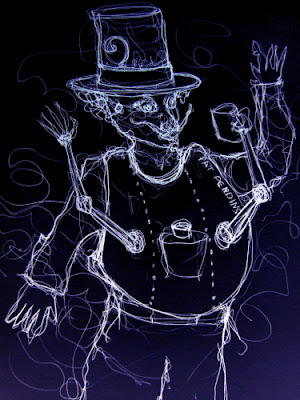 As a professional poker player Lester Livingstone was always looking for an edge to give him an advantage over his fellow players on the professional circuit.  And after reading the rules in detail realized that there was one rule that had been completely overlooked by the official body in charge of the professional gaming rules for poker.

It appeared to Lester that there was nothing in the rules to say that a man could only have two arms. In fact the more Lester thought about this, the idea of a man having more than two arms appeared to have many advantages.  So he invented the Livingstone Limbs which doubled the number of arms a man could have to a very useful four.  And as a card player he was able to shuffle cards in ways that no one had ever thought of before, confusing his opponents to such a degree that they lost concentration and would lose.

It also meant Lester could tie his shoes and put his hat on at the same time, drive his horseless carriage and read the newspaper as well as a huge host of other useful activities that were thought to be beyond the skills of the average Victorian Gentleman.

His down fall however was his showing off and while juggling fifteen axes for a bet he had a terrible accident.

His final word as he lay on his death bed a few hours later has gone down in history and is often uttered by many folk even to this day in a similar situation.