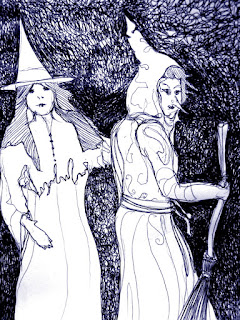 Yes it is not long until Halloween and so I feel it is time to write some Halloween Poetry, which the ordinary chap in the street such as myself can relate too, and go AH YES that makes the point very well indeed that is exactly what I was thinking. Anyway here is my first proper Halloween Poem of 2015 and I can say with some certainty it is exactly what I was thinking which must be a good sign.

Halloween and there is a gentle knocking on my door

Small children in black bin liners I spy there

And leap at them dressed

As a Vampire Grizzly Bear

And steal their sweets and growl at them.

And maybe howl loudly at the moon

With no plans to come back soon

Snarl and show my pointy teeth

And chase his cat up a tree

As he watches in puzzlement and fearful disbelief

And shout Trick or Treat or maybe even threaten demonic death . . . . .

Once I totally run out of Breath

And give me chocolate coins and some ice cold BEER

Letting me out the following morning

With a caution and warning me

Not to do it again