The Eve of Halloween, Fairy cakes (cupcakes) and Poetry 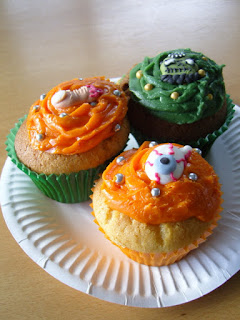 Well today is the Eve of Halloween and at our rather friendly and incredibly good local village Market, a market that as I have said before is in reality far better than anyone would expect from a tiny village in the middle of nowhere, but the fickleness of life resulted in our villages good fortune. OK back to the point at the market I bought three rather good looking Halloween cupcakes, one for me and one for two small children. They are in short term foster care with a member of our family as Mum is not too well and although I am not known for my friendly smile towards small children (OK the oldest is eleven) they are actually OK considering they have had a tough time.  I even let them decide which cake they wanted when they visited this afternoon. And even smiled when the youngest one ate the green cake which was MY CAKE so I was very good and only threatened to throw them in the pond a bit afterwards.

To add to the events of the day I am off to the local Vineyard tonight to look at some craft stuff as someone we know is running craft workshops. I do not intend to do any of the craft workshops myself as I am fairly versatile in my abilities and can do many many many things very badly. I will not be drinking wine either as I do not drink alcohol so they will shake their heads at me again as make TUT noises as I try and get a mug of cocoa, I may have to make do with Elderflower sparkly stuff.

OK I have one of my newer Halloween traditions to add now which is the Old and rather unpopular Eve of Halloween Poem which first appeared in 2013 (Oooooo time does Fly). I must admit I am no fan of Halloween as such but it is a great theme for us bloggers to get our very pointy teeth into. I will be answering the door tomorrow as I am expecting the arrival of a young Russian doing her first Trick or Treat event ever, so I have promised to be good AGAIN.. . . . . And I have Written an all new Halloween Story for tomorrow nights post. . . DEAD EXCITING or what (that is not what its called by the way)

So tomorrow night on Halloween
When scary monsters will be seen
It’s best not to answer your front door
Better to read the diary of………
Rob
Z
TOBOR
Posted by Rob Z Tobor at 17:36