Parts of Britain are not fairing well with the floods and although it has been dry today the next few days appear to be a return to more rain, just as our old mate Santa is about to turn up. Dad has built a large Steam Powered Post Apocalyptic, Jekyll and Hyde Santa for all those people who were hoping for Armageddon for Christmas. He has even filled Santa’s beard with fish paste and French fries from the takeaway to encourage flocks of seagulls to follow Santa into his fairy Grotto. Dads plan was to take his Steam Powered Post Apocalyptic, Jekyll and Hyde Santa to the out of town supermarket and offer him as an attraction but unfortunately dad was unable to get the store manager to unlock his office and most of the other store staff ran screaming in the opposite direction. Even the Steam Powered Post Apocalyptic, Jekyll and Hyde Santa’s chirpy smile and friendly ho ho ho hello and who would you like me to eat this Christmas didn’t help much. Dad did try and shout through the keyhole of the manager’s door He is great at eating left over turkey and old Christmas trees but it was drowned out by gibbering and the manager scratching at the floor tiles, trying to dig a tunnel. 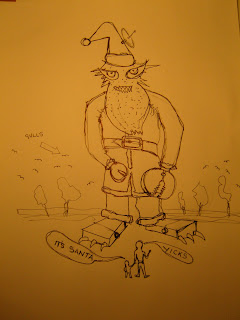 Dad was planning to take the reindeer to the store with him but mum said they were too scary and looked like a pack of 30 foot high demonic werewolf’s and that the idea of converting a Trojan Space Gull into a sleigh was just plain stupid.  Dad said the public are boring and will probably sit and watch repeats of the Morecombe and Wise Show while trying to get an entire tin of chocolate into their mouths at the same time. I’m sure dad is wrong surely no one would do that  . . . . . . . . . . . . . . . AH
I spent an hour yesterday doing a quick bit of recording and so if all goes to plan it will be available on line to listen to, I am still working out what does what at present with all the controls and it is all a bit basic so nothing clever just me and a drum and a harmonica and a bit of bent metal that goes boing. As I type I am also trying to work out how to get this uploaded, what I need is a clever Ghost Writer

Email ThisBlogThis!Share to TwitterShare to FacebookShare to Pinterest
Labels: Christmas, djembe, seagulls., steam powered, the End of the World