Welcome to the Addman Interview (part one), an in depth interview by me ROB Z TOBOR of fellow blogger Mr Addman about Life the Universe and Everything, getting the answers to the questions that we all need to know. Questions like who is this masked crusader AH I forgot to ask that question, but I have asked loads of questions and he has responded with loads of answers. Well I hope so as this is a cyber interview, not an eyeball to eyeball interview, so if he has not responded then this interview is rubbish.  Although I can make up answers if I need to (only kidding Mr Addman) . . . . . . . . . Phew got away with that one.

Qu 1                 Well Mr Addman here we are and many of my readers will be keen to hear about your forthcoming efforts to produce your very own Ewok. With all this talk of a new Star Wars film I can see why you have decided to do this, a clever move indeed.

I'm glad you think so.  I first had the idea when I witnessed an explosion that happened in a wig factory.  The resulting hairs blew all over a group of passing school children, and it was then that I realised there was a small, hairy gap in the market.  Unfortunately, the adoption agency wouldn't give me enough children to start my Ewok production line, so I decided to release an Ebook instead. 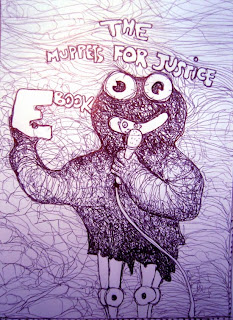 An Ebook is pretty much the opposite of an Ewok.  They are furless, comprehensible, and have never brought down an evil empire.

My particular Ebook is called Muppets For Justice.  It is a collection of posts from my long-running Blog of the same name, plus a lot of bonus new stuff written specially for the book.  It's roughly 50% new content.  I consider it to be a Greatest Hits album, but with loads of bonus tracks and b-sides that people won't have seen before.

Qu3                  I think you need to explain more about the metaphysical aspects of your work; the deep underlying urges that have brought you to conceive your plan and give us a little glimpse of the real Addman, the one hiding behind that frail façade of hate lust and cold soup.

I would love to talk to you about my deep, underlying urges, but that might frighten off any potential readers.  I don't know about the metaphysical aspects of my work.  It's just there to entertain and hopefully make you laugh.  It is a series of short comedic articles with no real agenda or over arching theme, and most of them are completely unrelated to each other.  It's perfect to pick up and read in short bursts.

Qu4                  There is an old saying . . . . Not for the Faint Hearted  . . . . Well to me this is a silly saying, lets face it if your heart did faint it would be called a heart attack and you would be rushed off to hospital proto, sayings like this should be banned from this interview. Bearing this in mind Mr Addman are there any questions you do not wish me to ask you . . . . .

Well I'm a bit nervous of questions about my heart now.  In fact, I feel a panic attack coming on.  Open a window or something!  Get me a hot towel!

Qu5                  Well having thought about your answers so far I note you have a Faint Heart when I thought we agreed about not discussing it further, with that in mind I think we should discuss this Hot Towel. Is it one you have stolen yourself or is it one you bought cheap from a man in a pub who knew a man who stole it from a bathroom in a wig factory.

Wait, we're discussing a towel now? This is a papparazzi style invasion of my privacy. Do you want to know the colour of my cream towels? What about the zig zag pattern on them? I will never tell. My towels didn't ask to be part of the limelight and I will keep them separate from my public life, thank you.

Qu6                  Your blog although rather good does sometimes use rude words and discuss naughty things and for a young middle class eccentric like myself I am forced to shut my eyes while I read it. Will your new Ebook contain naughty things and naughty words? You may be interested to know the lack of anything naughty in my blog has made it one of the least read blogs in the world, but it is child friendly although they don’t understand it, silly children.

I'm afraid that the Ebook will contain several naughty words and themes. I try not to be needlessly vulgar and try to mainly use strong language purely for comic effect rather than distaste. I hope I get the balance right.

Hmm, that makes the Ebook sound like it's just a few hundred pages of filth. There's a lot of optimistic topics in there too. In fact, there is an entire section on the wonders of cuddling, so there's a whole spectrum in there.

Qu7                  To be serious for a bit I notice you have blogged for some time now Mr Addman, do you have any advice for those new to blogging some inspired words that will keep them going where thousands have said sod it I’m off to the pub and abandoned their blog for ever. (NO blogging in the pub is not allowed as an answer).

Without wanting to sound like I'm some sort of social media guru, one of the biggest parts of Blogging is building a community for yourself. Find a group of Blogs you enjoy reading, contribute and leave them comments, and some of those people will reciprocate. Also, try and stick to a regular, acheiveable schedule. Unless you're a superhuman (like you Mr Rob), don't expect to be able to Blog every single day.

Qu8                  You have also experimented with Pod Casts, there is an old saying (from the bible I think) that goes . . . . He who Pod casts the first Stoat shall ferret about in rubbish bins and pass through the eye of a camel . . . . .  I was wondering do you have any old sayings that you hold dear to your heart. Sorry I mentioned that dodgy heart of yours again.

Sayings that I hold dear? My always used to say "never shave your legs on a Tuesday", although I've yet to experience a situation in which it has proved useful.

I am actually partial to the saying "only a true wit can play a convincing fool". If that's the case, I strive to look like the biggest idiot to ever grace the Internet.

Qu9                  What inspired you to start a blog, and does this new adventure mean you have grand plans, something cunning and devilish that will astound us all with its brilliance and yet simple genius. Something that will bring gasps of amazement and make folks hearts pound (AH DAMN sorry I mentioned pounding hearts  . . . . Sorry).

I started Blogging to practice my writing. It started as a sketchpad for me to try out new ideas. I'm releasing the Ebook because I think it has blossomed into something bigger. I'm proud of Muppets For Justice and I want to show it off. Also, this is a good test to see what self publishing an Ebook is all about. In the future, I may publish a bigger project such as a novel, who knows?

Because they have hearts on them. Argh, now I'm mentioning hearts again! Ack!

Well thank you Mr Addman I had at one point planned to ask many more questions but looking at what we have done between us I have to say I think it is an excellent interview and I am pleased it has gone so well.  We have really got at the heart of the matter (DAMN I mentioned that word again).  Before I entirely rewrite your answers (HAH HAH AHHAH HAH HAH HAH HAH Hha ha ha ha ha ha ha) I wonder if you would like to add a few final words, Maybe you have a date you hope to get your Ebook published by, although I am sure we will hear more from you as things progress.  I wish you luck and will leave you the final word (I of course will not restrict you to the one word), once again many thanks for taking part.

The Ebook is scheduled to go up on the 3rd of January, and will be available in all good retailers, provided that retailer is Amazon.

I've thought long and hard about the final word, and I've decided that "bus" might be a suitable one to end on.  It's a very nice word if you say it often enough.  Anyway, thanks for the opportunity, and I'll leave you with bus. 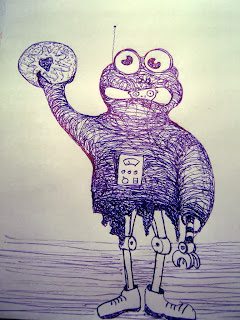 Well Mr Addman I had planned to finish with your final word but it has given me the opportunity to say . . . . . . . You wait for a bus for ages and a whole load of them all turn up at once.

The Muppets for Justice Blog is available at the following link please have a read, After all there are millions of blogs out there and it is good to work together as a small flock. Which allows us, like a flock of crows to raid the farmers field and eat all his corn…….

Please note this is my first collaborative effort and interview on this blog, but I am happy to interview other folk in a similar fashion should you feel a desire to be interviewed by me, bearing in mind I am a bit rubbish at it.
Posted by Rob Z Tobor at 11:16