Once upon a time there was a small frog, but he was a small frog with grand ideas. In fact he spend much of his life convinced he was a Prince. This meant that all the small frog had to do was get a passing Princess to kiss him and and he would be propelled into the lifestyle he though his life deserved. (Something we all think at times). So to this end he spend much of his time by the side of a busy road on a particularly damp mound waiting for a princess to pass. More common than you might think as the road led to the Kings Castle a place where Princesses would often go looking for a Prince to marry.

Now most of the time when the little frog called out to a passing Princess that he was a Prince and that if they kissed him they would be well impressed, the Princess would scream and run away. Most Princesses do not read popular fairy tales so were unaware of such a possibility. However every now and again a passing Princess would think . . . . . .Well it can do no harm and you never know . . . . The problem was that when the Princess kissed the little frog they were instantly turned into a small frog. Not what the Princess (or the little frog) had in mind and they would scream and leap off into the distance (probably coming to rest in a suitable pond).
The little frog did not get to downhearted by this and put it down to technical issues to do with the magic involved and the passing Princesses general DNA. After all as he would often tell other critters such as snails, mice and wood pigeons. It was not that the magic did not work it was just that it did not work quite as planned. Lets face it we are all very used to plans that do not work as planned, OK maybe it's just me then.

Now as time passed rumours of missing Princesses started to reach the Kings Castle and the King as you might expect was not entirely happy about this. I mean these were not just ordinary folk that vanished on a regular basis for all sorts of reasons. No these were Princesses they were important folk and therefore something needed to be done about it.

The King was sure that some sort of huge monster or dragon must be eating the Princesses after all that is what normally happens in these sorts of fairy tale and the King had read loads of them. So he put together a band of his best Knights and set off on his quest to defeat the beast and become a great hero. He was convinced that this was a tale of The Good Heroic King, His Trusty Brave Knights, The Monster/Dragon, a Princess (or 2 or more) and a Witch.

Ah yes no one has mentioned the Witch yet have they. Well the Witch lived in the great forest as many Witches tend too and was extremely friendly doing no one any harm whatsoever and keeping a low profile. Folk back then were not always friendly towards witches and would often do terrible things to them.

Back at the Kings Castle a great banquet was held by the King before he set off on his quest to save the many missing Princesses or at least kill the monster that has probably eaten them. Then to much cheering and waving of flags early the following morning the King left the castle and the grand pressession headed towards the mountains where it was assumed the terrible beast lived.

Well as we all know the King was entirely wrong about everything and because of this his quest did not entirely go to plan (as the little frog had found out himself plans do not always go to plan). And so after many false leads the King and his Knights conceded that they may have to return to the castle and possibly sort of make up a bit of a story to avoid looking very silly. The castle had been left in the hands of an elderly, but trusted Knight to look after. These were the days when Kings had to keep an eye on things. Turn your back for a bit and before you knew it someone else who thought they should be King would be raising an army to get rid of you. The elderly Knight however did a good job and everyone at the castle was extremely happy and all was well.

And so it was that the elderly Knight received a message after many months of the Kings impending return. The Knight thought he would ride out to meet the King and welcome him back and so it was that he happen to ride past a small damp mound at the side of the road with a small frog sitting on it. The little frog asked the Knight whether he had seen any Princesses and explained that he was very annoyed that everytime he kissed them to become a handsome Prince it all went wrong and they would turn into little frogs. The elderly Knight was not a fool he realized that the Kings quest had been futile and rather than a huge monster/dragon eating all the Princesses they were in fact all living in the forest in ponds. He also knew of the Witch in the forest, they had been friends years ago and so he thought  . . . I know Ethel the Witch can sort this out dead easy . . . . And as the King and his entourage of Knights rode down the road towards the castle what came into view was the elderly Knight, a Witch, a small frog and a large group of very wet Princesses.

The elderly Knight explained to the King what had happened to the Princesses and that they had now been turned back to normal from frogs and that everything was as it should be once again. Well much to the elderly Knights surprise the King was far from happy, after all he had been on his quest for many months. He was not pleased at the thought of returning to the castle with nothing to show how brave he was, just a small and in his opinion a very stupid little frog. So the King demanded that the Witch should conjure up a huge scary dragon with wings, pointy teeth a big claws so that he and his Knights could defeat the beast and take its remains to the castle to show the world how brave they were.

Despite advice from not only the elderly Knight, the Witch and even the small frog not to fight a huge beast the King insisted and so the Witch as requested produced a Dragon for the King and his Knights to fight. The King and his men were very impressive, but of course the outcome was that they were all eaten. The dragon then flying off towards the mountains never to be seen again leaving the elderly Knight, the Witch and the small frog to ponder.

That did not entirely go to plan said the small frog. Things seldon do replied the elderly Knight wisely.Adding I guess I must return to the castle, the Witch also adding and myself back into the forest I think. And with that the both left.

The small frog suddenly found himself all alone, the Princesses having all run off screaming at the first sight of the huge scary dragon. Well that is what the small frog thought, but it was not true. You see sitting behind the small frog was another small frog. It seemed that one of the Princesses decided that she prefered to be a small frog. There were many reasons for this, but that is an entirely different story which is far to long to tell here. Anyway after a long long chat and time spent together catching flies the two small frogs vanished off into a pond deep in the forest not far from the Witch who would often pass and say hello and they lived happily ever after.

Nearly but not quite the End
Yes you see fairytales need morals and this one is no different to any of the others although to be frank fairytales dont have the same morals as they used to. That sadly is the way things are these days. So what morals and wise things can we deduce from this story. Firstly it is clear that whatever plans you make it is very likely they will not go to plan. OOOooooooo I have discovered this more times than I care to think about. Secondly beware what you wish for, look at the poor old King and his Knights out to save the Princesses and wanting to fight a huge dragon. That certainly did not go to plan or end well for them. And then the small frog who wanted to be a Prince finally realized that being a small frog did not mean he could not be a Prince and that a true Princess or Prince was all about what was your/their heart not what they/you look like.
So there you have it thats it The END . . . . . or is it. . . . . 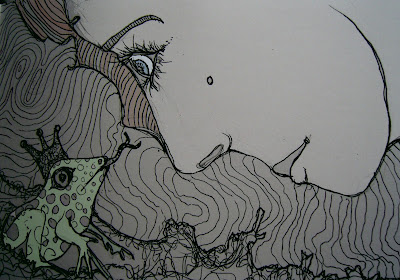 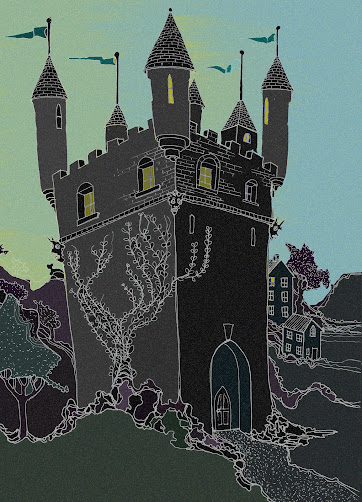